At eleven a clock a.m October 21st – six Norwegian see kayak beginners met up at Nordic EcoTours’ boat houses in Rådalen, Heestrand for instructions and planning of the tour. After basic instructions of kayaking vocabulary and how to paddle a see-kayak we launched for practical exercises in the calm bay. It worked very well from the beginning so we left the shallow waters and started our planned tour. One kayak guide in the lead and one in the the end of the kayakers. For security reasons we chose a double kayak as a follow kayak. Water temperature in late October is still reasonable high but of course , much cooler than in summer (today about 14 degrees Celsius). 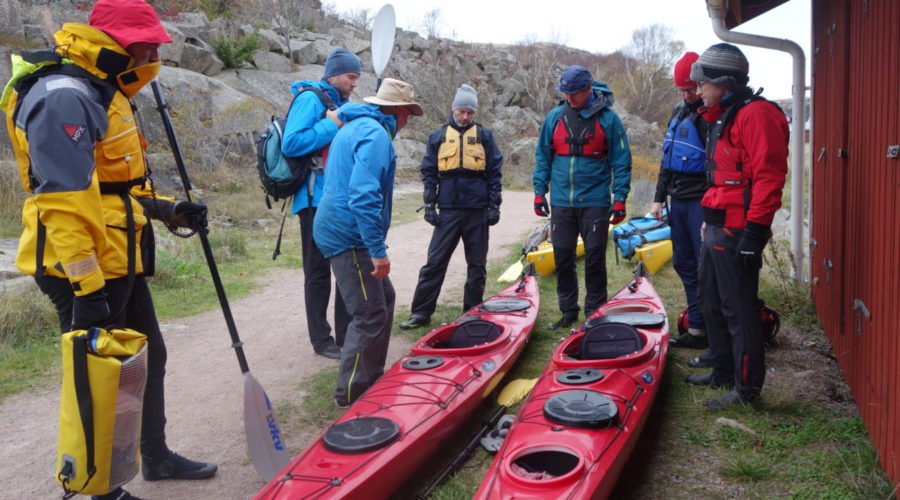 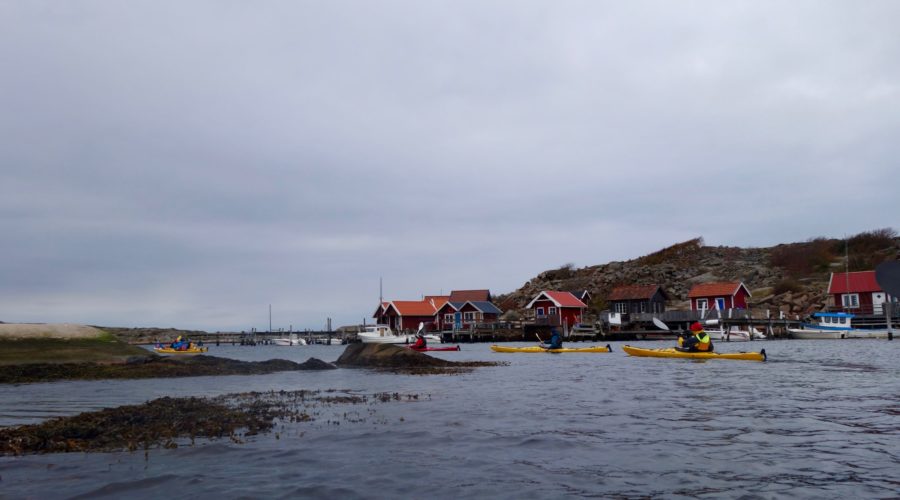 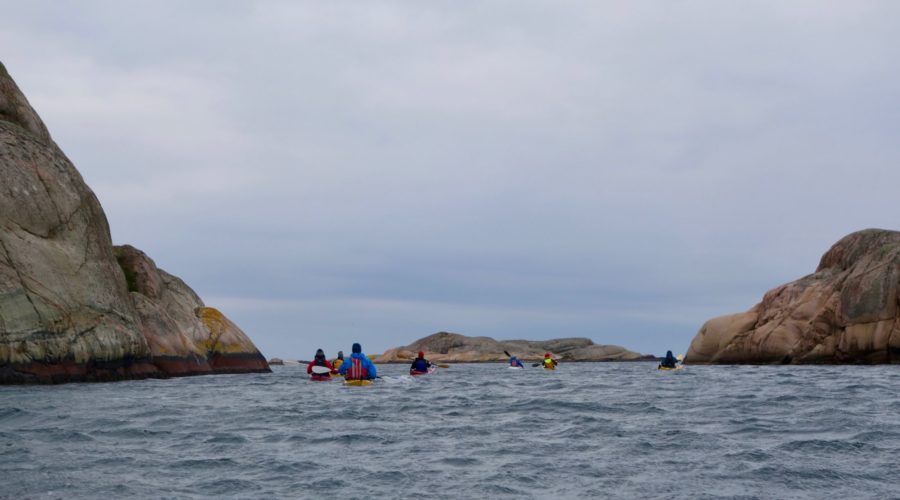 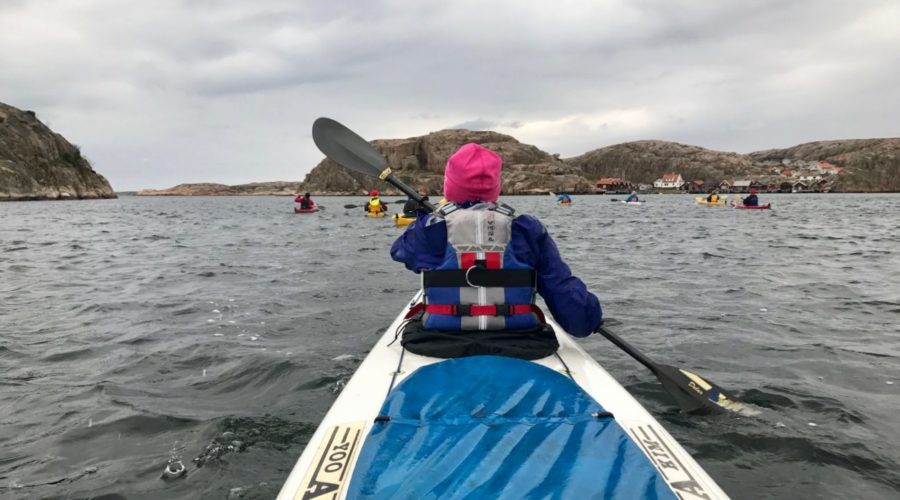 We left the little village Heestrand (an old stonemason village) – in a cloudy and a bit rough autumn weather. With a strong tail wind we got a very good speed from start. The team met up very well acting like a tight an assembled group. Thanks to fast learning paddlers we could vary the trip a lot. After some kilometers we had our first stop – a sandy beach where we practised to get out “dry” from our kayaks. “The hardest thing about kayaking is to get in and out of the water without getting wet”. We had also time for some hot peppermint tea, some fig rolls, fruit and some snacks. 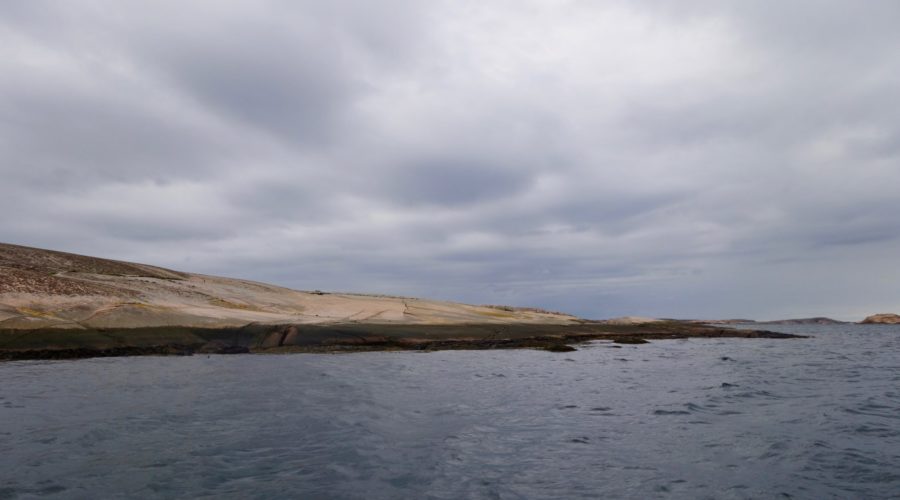 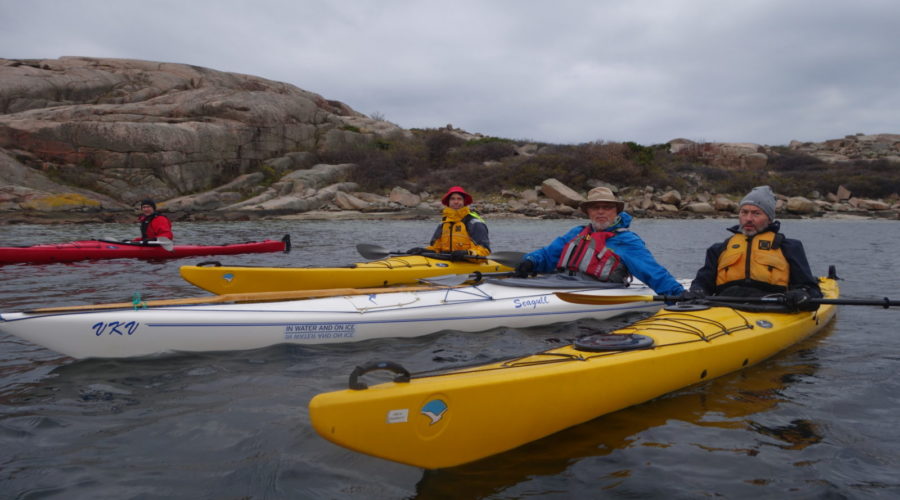 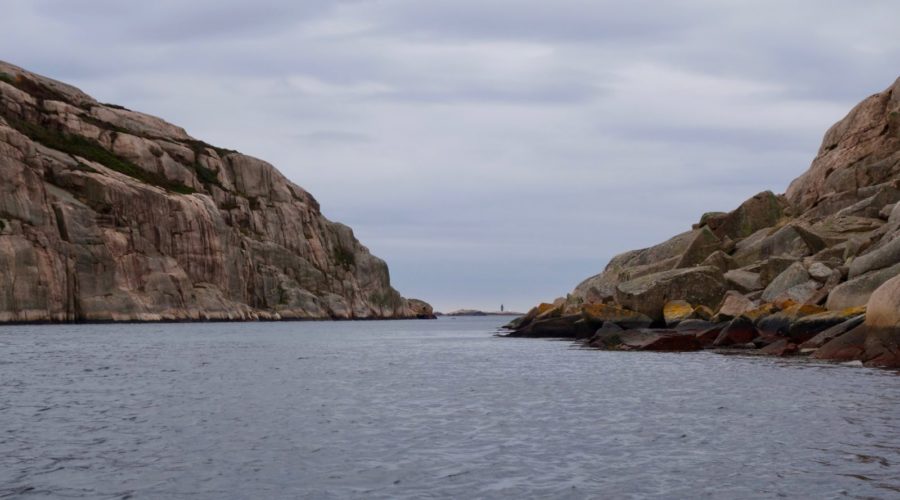 Satisfied after the break, we continued in the strong east wind in shelter of big and rocky granite islands. After half a mile we changed direction southwards paddling through narrow passages in shelter from the wind to find a suitable landing site for our lunch. Along our trip we had a fantastic contact with the high surrounding mountains. We left the inner archipelago and headed towards the horizon. 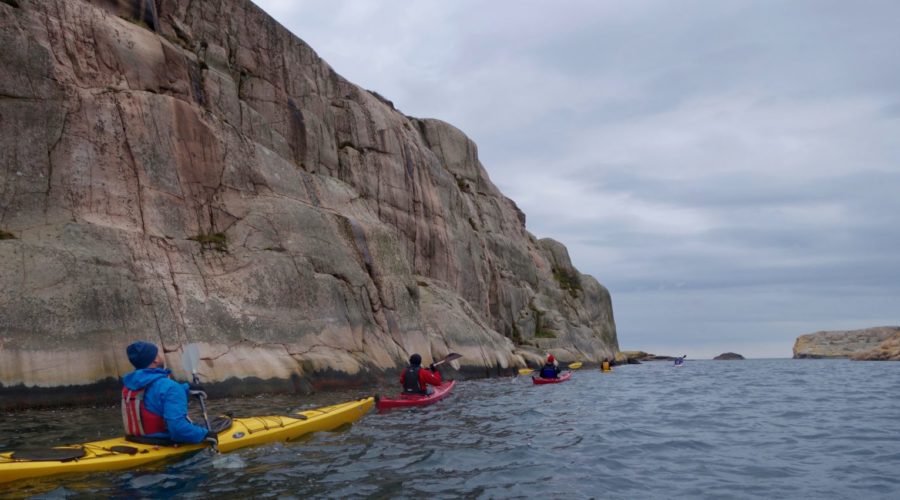 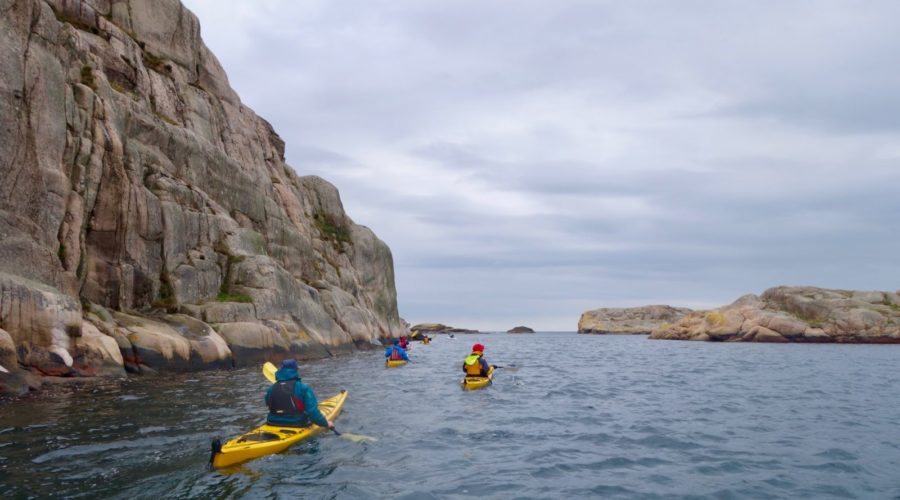 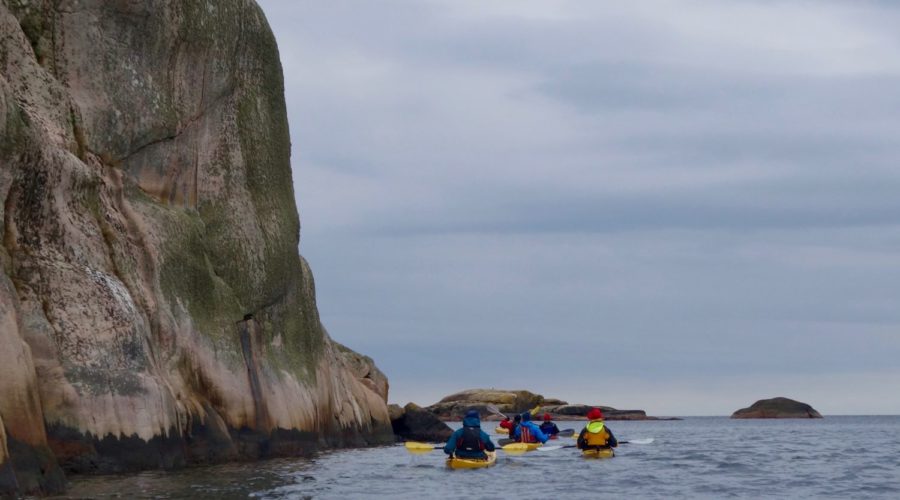 After some kilometers we reached a wonderful site – the west side of Lilla Hamburgö/Jakobsö -for break and lunch.  The sandy beach with seashells was surrounded by high mountains which sheltered us good for the gusty hard winds. Cold fallows reached us though on the beach. Soon we got a nice fire perfect for grilling our locally produced sausages. One of the paddlers immediately took the role as a barbeque master and fulfilled his duty with excellence. A potato salad, vegetables, fresh bread saturated us. The meal was completed by coffee boiled over the fire and home made apple muffins. 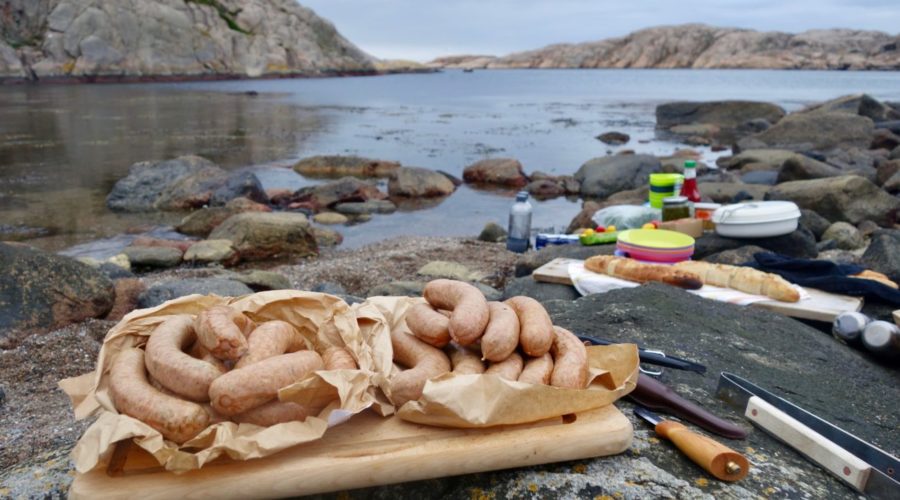 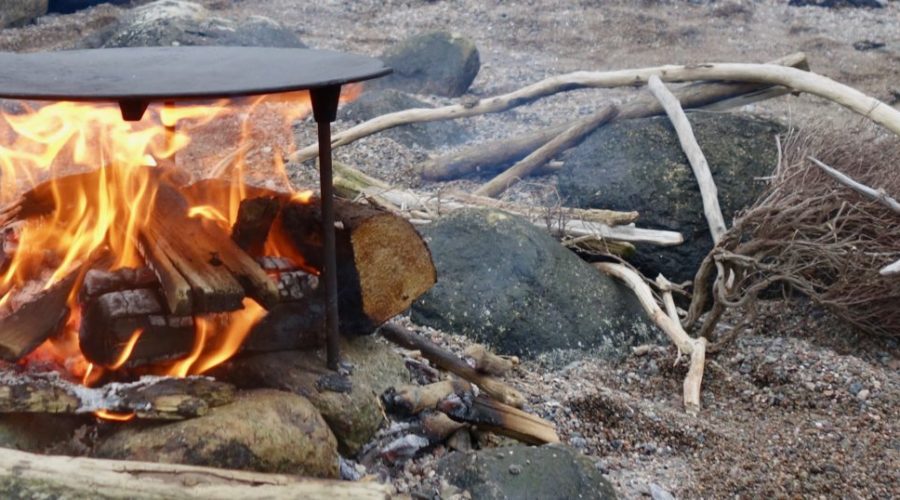 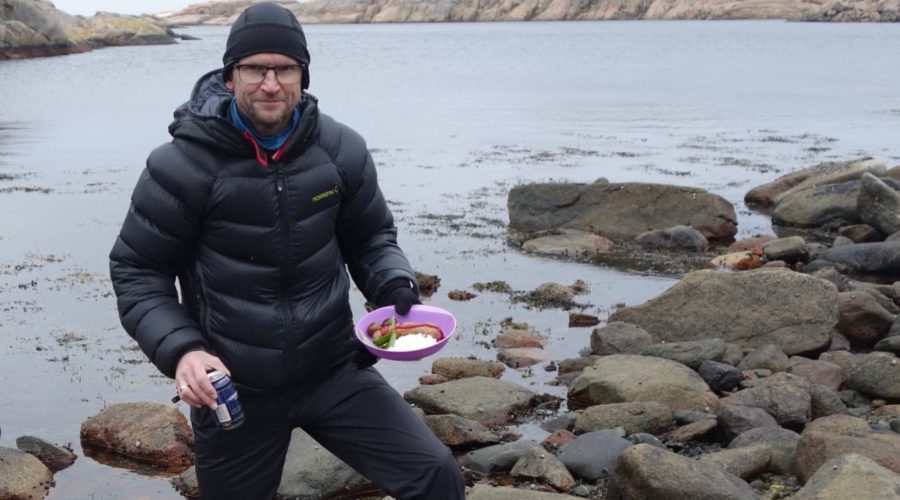 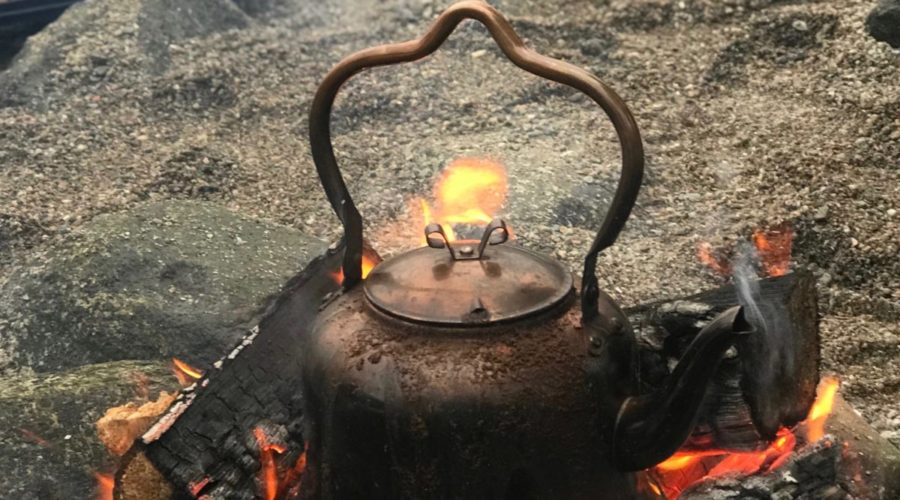 After a refreshing meal it was time to enter the kayaks again. Further and further out in the outer archipelago along the high granite cliffs and a spectacular view of the Skagerakk horizon in the west and “Saltskärs Käring” in the south. 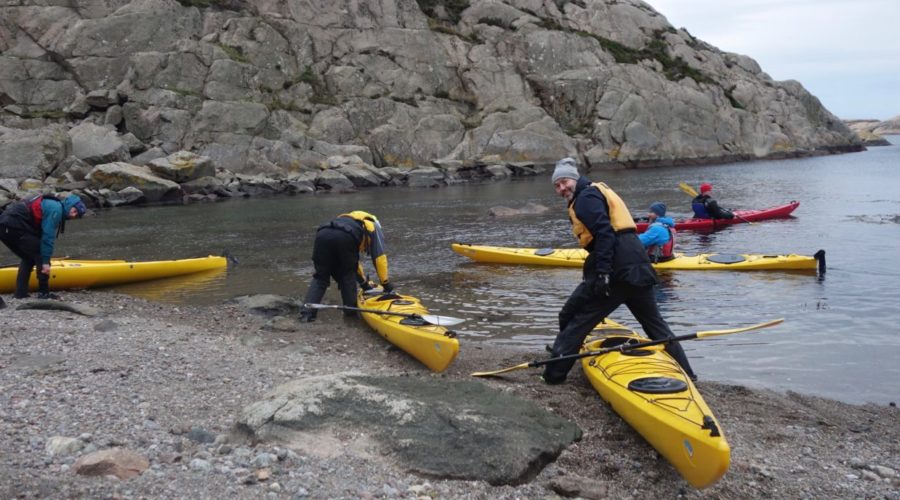 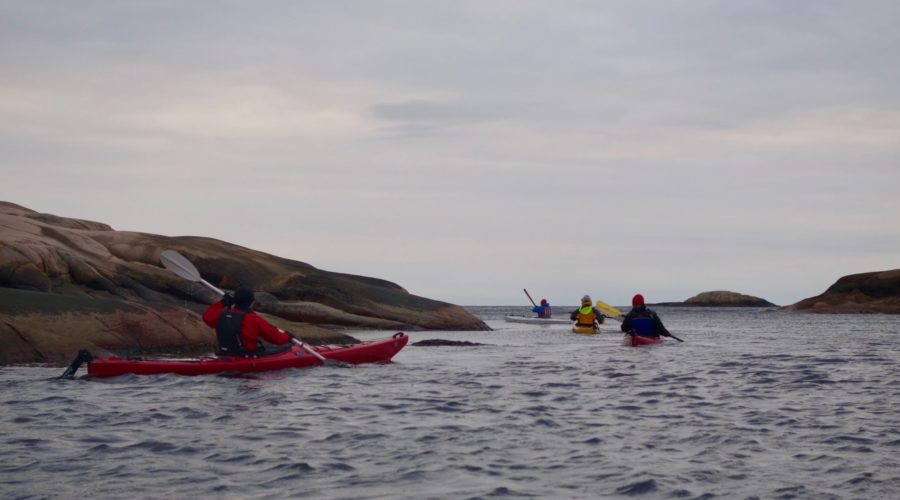 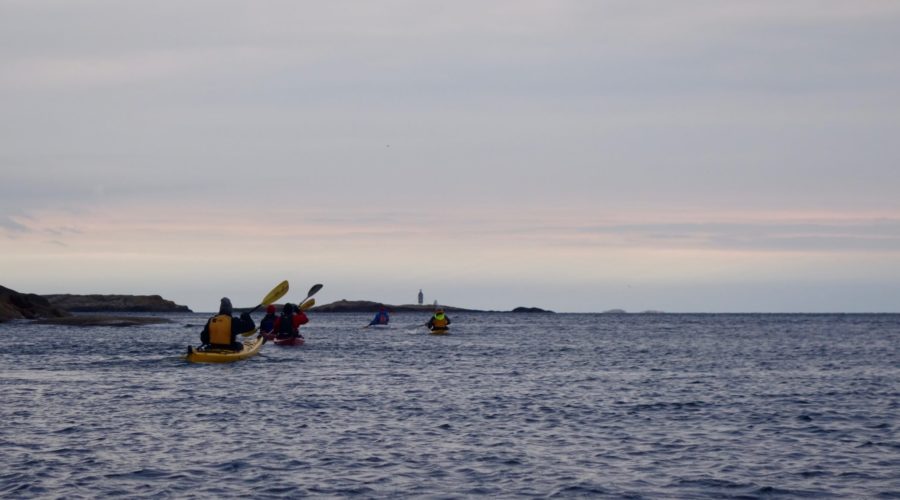 Below the fabulous steep cliffs on the west end of Kiddö island – we shot a group photo of the clever kayak group. Very nice team to handle! 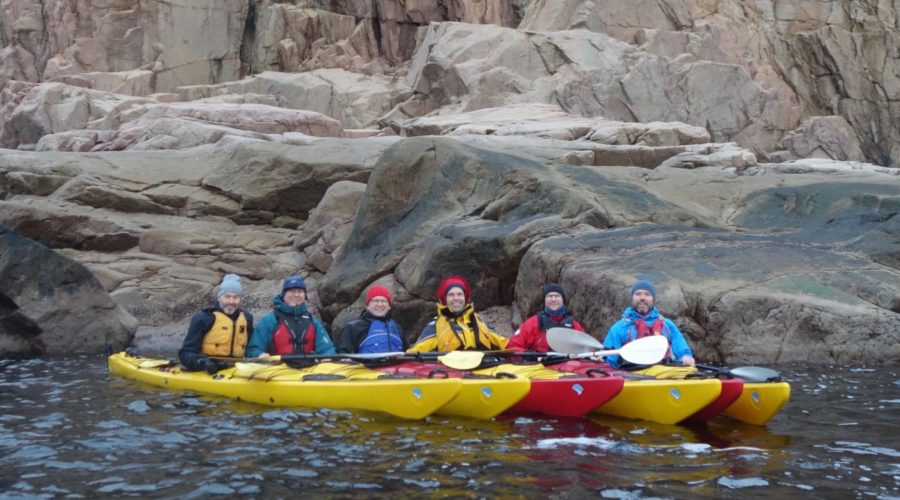 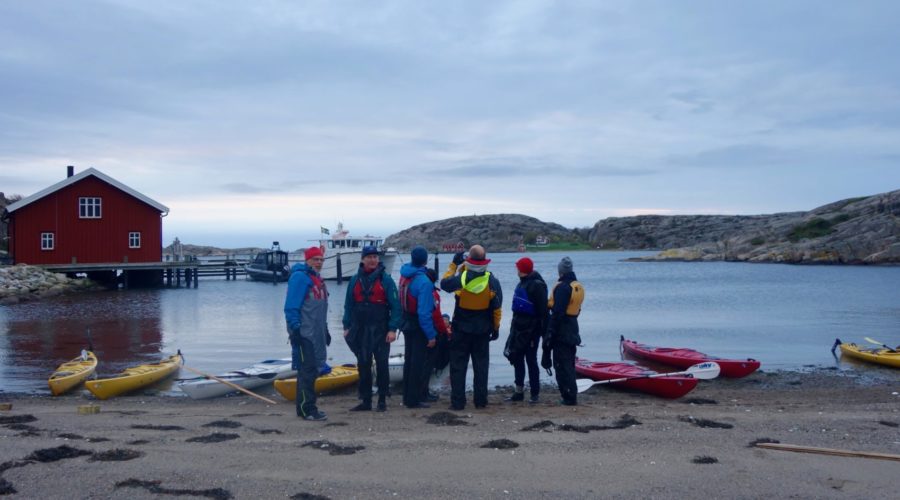 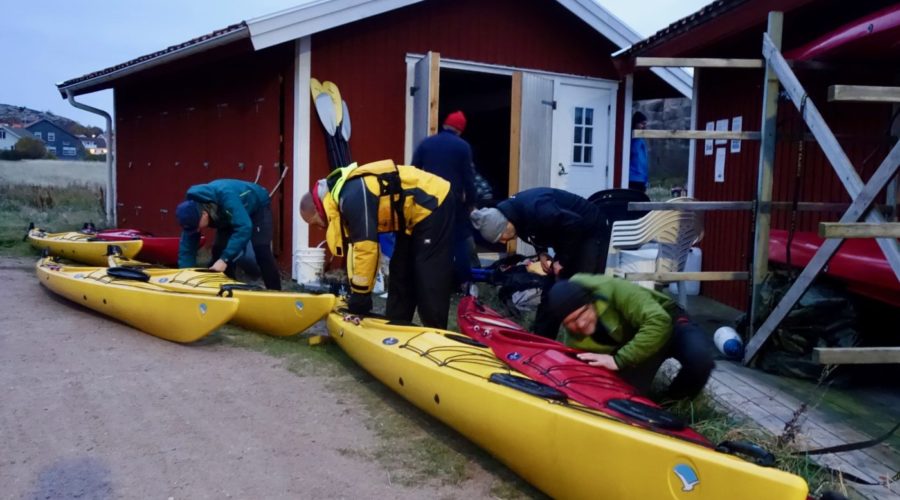 Back to Heestrand again after paddling through a shallow strait called “Grundsund”. The circle was closed and now met the very strong head wind. We crossed a sound and landed at “Karlsvik” (Hamburgö island) beach fora short break. With renewed powers we finally reached the starting point again. Thanks for good company and restoration and cleaning of kayaks! 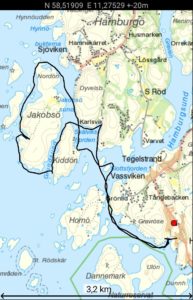