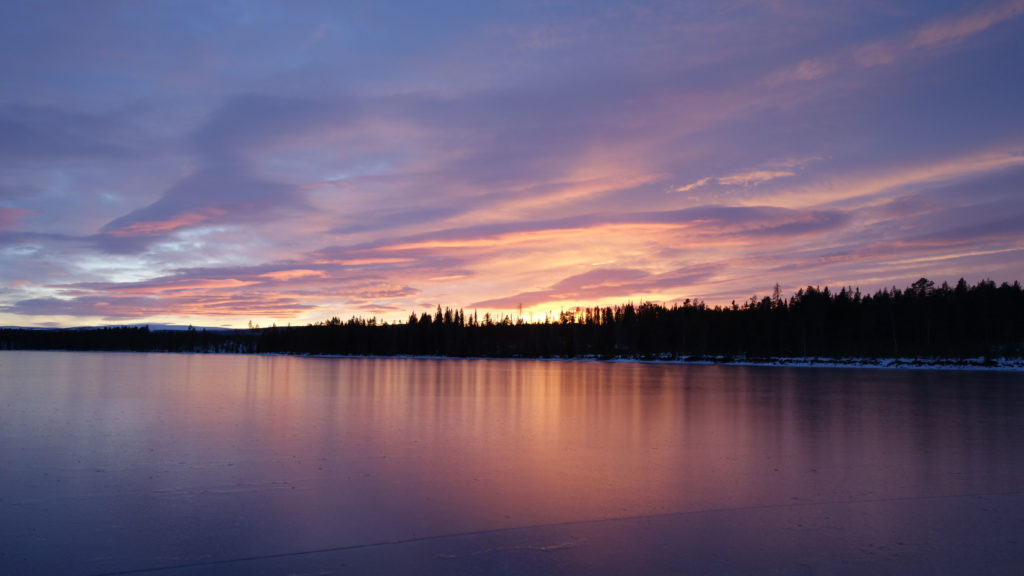 It´s something extra in the beginning of the skating season when lakes start to freeze so you can choose and plan your trip between different places. We had followed the weather reports and knew there were snow in the north of Dalarna followed by a thaw period and there after temperatures below zero. Had the snow melted? Was there a good surface to skate on? The answer was YES!

We started our trip in the morning at lake Horrmunden – an ideal lake big enough for skating a whole day.

It´s always exiting  tofollow the shores of the lake and investigate nature. The nature is quite silent, only some birds show up. We had a Siberian jay near us and some ravens were circling above us. Otherwise the only sounds were from our skates touching the ice.

After 58 kilometres on stable ice we were happy to have a good meal and a good night´s rest at Knappgården north of Särna and make plans for the next day.

Heading south agaig exploring new water sytems. Many lakes are water reservoirs, which means that the water level is higher than it was from the beginning. Skating between stumps and tufts in labyrints is really fun! After 15 kilometers on good ice and with fjells in the distance, we moved on by car to another new lake for us.

We had waited a couple of years to explore lake Ransi. Today the dream was fulfilled. That lake is a real gem. In total wilderness, only with a couple of cottages, we were one with ice and nature. With the top of Mount Städjan in the distance, lightened up by the afternoon sun, we started our tour round the lake. The light was wonderful, almost no wind and good ice. The top experience was skating upstream river Björnån (Bear River) for kilometers. After the total trip round the lake of about 17 kilometers we were happily back at our car and headed south for new adventures day three.