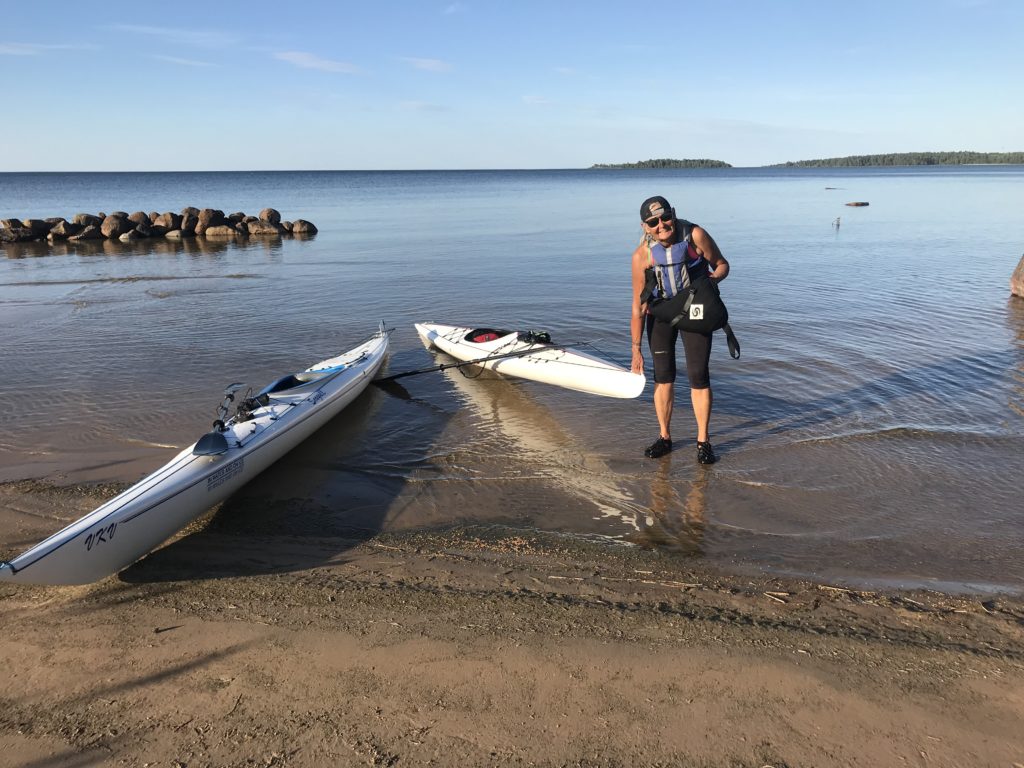 We found a very nice sandy beach to start from, close where the end moraine Hjortens udde heads out in the open “sea”. Blue horizon as long as we could see – only the haze profile of the volcano shaped mountain Kinnekulle breaks the line in the far east. The mountain has always been an important navigation point for seafarers. In the past, the mountain was thought to be  held by magic powers. It was unfortunate even to watch the mountain.Today’s paddle goal was to take us to Mellerud and Vita Sannar – a twenty km paddling. To reach this we had to round a number of capes exposed by waves. That can be particularly dangerous as the waters here are shallow and filled with large pebbles that form ridges on the bottom of the lake. Because of that we always try to keep far out from the shoreline where you reach deeper water – safe water! The area around Hjortens Udde is well known for its shallow rocky bottom. Too many shipwrecks testify that!

Even today the weather was on our side! We could fully enjoy the trip. Lots of birds showed up during our trip. Common sandpiper is more or less our constant companion along rocky shorelines. After passing some capes without strong winds we changed our direction more westwards and immediately the strong headwind pressed us to paddle harder. In our sight was a rather big forested rocky island, “Storön”. In shelter from the island we steered our kayaks in a calm little bay. The geology changed from striped rocks (gneiss) to dark grey/black rocks (gabbro) with lot of cracks. Time for lunch and preparing next stage. An adorable mini archipelago surrounded us. Far in the east we assumed the majestic contour of mountain “Kinnekulle”. Suddenly two sea eagles showed up in the hard west wind – the wind kept one eagle on the same spot in the sky over the forested island – probably their nesting place.

After lunch we planned to try to go inside “Storön”. Our map showed a little channel in the reeds. But after an hour of testing to find a way through we had to give up. Well – back again to the lunch rock. We discussed whether to go the outer way around the cape of Storön or to head back again. Suddenly the air was full of mating and dancing dragonflies. We admired the dancing dragonflies! And then a falcon, a hobby, posed up from nowhere.  As a shooter it chased the dragonflies in all directions and levels. What a show!

We decided to meet the strong headwinds behind the cape of Storön. After 4 km we reached the sandy beaches of “Näs Sannar”. Amazing clear water and fine grained sand welcomed us for a meritorious break!

After some rest it was time for kayaking again. The shoreline with several sandy beaches called  “Sannar” consists of three different beaches: Järns Sannar, Näs Sannar and Vita Sannar. After leaving adorable Näs Sannar we arrived to a mini archipelago and a rocky coastline met us again. Suddenly we heard warning calls from an osprey. We observed the fantastic well situated nest in a top of a fur tree growing on the rock. Quickly we paddled further towards the sandy shallow waters of Vita Sannar.

Again we started on the sandy beach just north of Hjortens Udde. It has always been an adventure to round this cape, especially when hard winds comes from the big open lake; e.g wind from almost all directions, except western winds. Another factor is the shallow waters in a very big area around the cape. This place is said to be the most difficult place in lake Vänern to navigate across. Hjortens udde is an end morain – created during the last ice-age. The ridge  “dives” under the water to appear again on the other side of Lake Dalbosjön. There it’s called Hindens rev – a four km long and very narrow cape (looks like an arrow pointing to Hjortens Udde in the west). Today we were lucky to manage to pass it close to the rocky beach as the winds “were on our side”. Very soon we passed the old wooden lighthouse – from 1852. It’s the only lighthouse in lake Vänern built by money from the state.

Fantastic paddling over shallow waters with fresh tailwind heading southwards. In the far south we saw the flat “cake” contour of a magnificent mountain seeming to swim on water! It was the profile of Halleberg. The sight southwards was several kilometers along the flicky coastline which informed us to meet a rocky shoreline and several capes to round. We where happy for the perfect weather conditions of today. Wonderful clear sights in air and also clear sight down in the water. This coast is really an adventure to investigate. Wild nature and almost no tracks of human beings! A bay of interesting islands and islets attracted us so much that we took a peaceful rest there.

Incredible clear water, singing birds and a colorful flora surprised us. A perfect place for contemplation and to enjoy a nutritious lunch.

After many kilometers with only sounds from nature itself – the waves throwing us forwards accompanied by sounds from nesting birds like seagulls and terns. We had a wonderful surf experience! Sooner than we expected we arrived to the outlet of river Dalbergså. We arrived with big waves throwing us up the river with exceptionally high speed! Just a few hundred meters of waterway and we where on our starting point again – a camping and leisure boat harbor. Outstanding!

Below are some pictures from the very old remnants of a very important fortress “Dalaborg”  (The headquarter of early “Dalsland”) during its big days 1367-1434! It was worth a visit from land after our kayaking as we passed it so quickly and had to concentrate on paddling in the heavy surf!