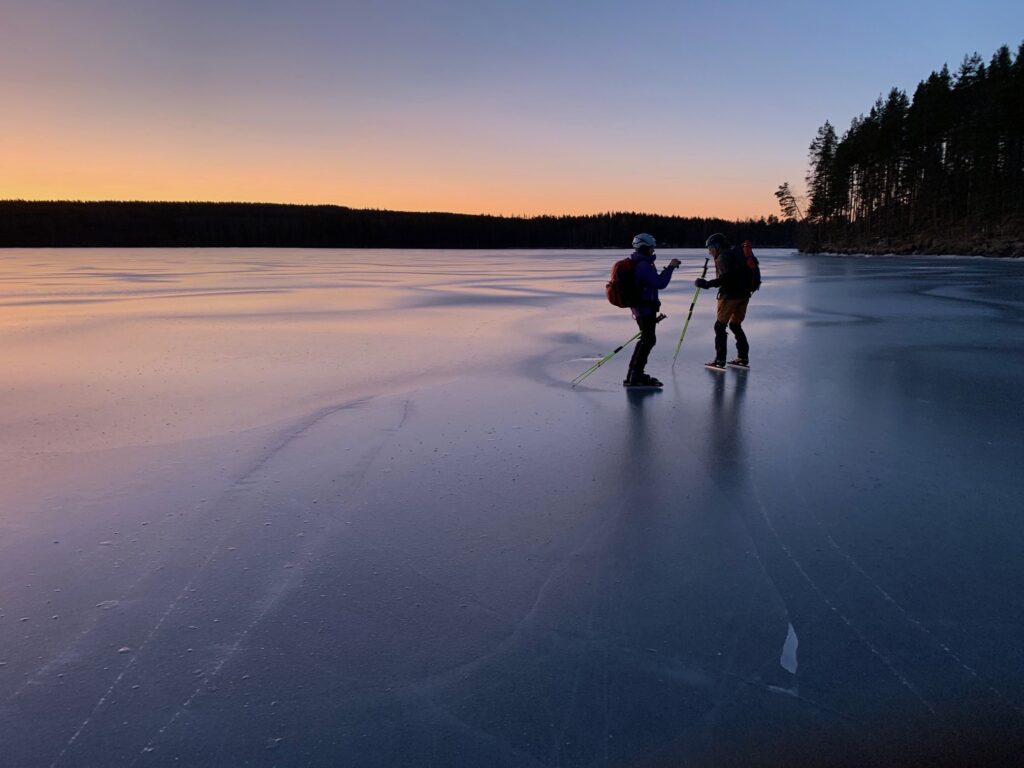 The warm winter with no skatable ice in “our regions” – southern part of Sweden – brought us further north with our Canadian Skating Friend. The region “Tiomilaskogen” between county Värmland and Dalarna felt like a coincidence – skating in the tracks of Finnish people. Our last skating trip was to Finland and this is the region to where the Finns emigrated in the beginning of the 17th century. There was famine in Finland and our king Karl IX offered land in this part of Sweden which was totally inhabited. Nowadays the journey from Finland to this region is less than a day and night. It took a couple of years for our immigrants to reach their new settlements.

All these lakes are parts of regulated water systems to extract electricity. It means that the water level differs a lot during the year (between 2 – 5 meters). The eco system is affected in a negative way. Fish species that migrate can’t do it anymore because of the dams, tubes and locks. Earlier these lakes had lots of salmon, eel and trout. Nowadays you find pike, perch, roach, whitefish and different carps. The beavers can’t build their lodges by the lake because the water level fluctuates. Beavers mean a lot to biodiversity.

Findings of Stone Age settlements at Nain indicate an early settlement. The Stone Age families depended on good access to trout, eel and salmon. This was probably also one of the reasons for choosing a place of residence for Finnish immigration in the 17th century. Per Hakkarainen came to Nain around 1635 from Savolaks in Finland. “From a distance he saw a lake and it was Lake Nain he had seen. He liked the surroundings. There on the west side it was very beautiful and he thought that in this lake there should be a lot of fish … “.

3 days, 3 skaters and 3 lakes in 3 different ice and weather conditions are invigorating and fills your soul and body with loads of energy!