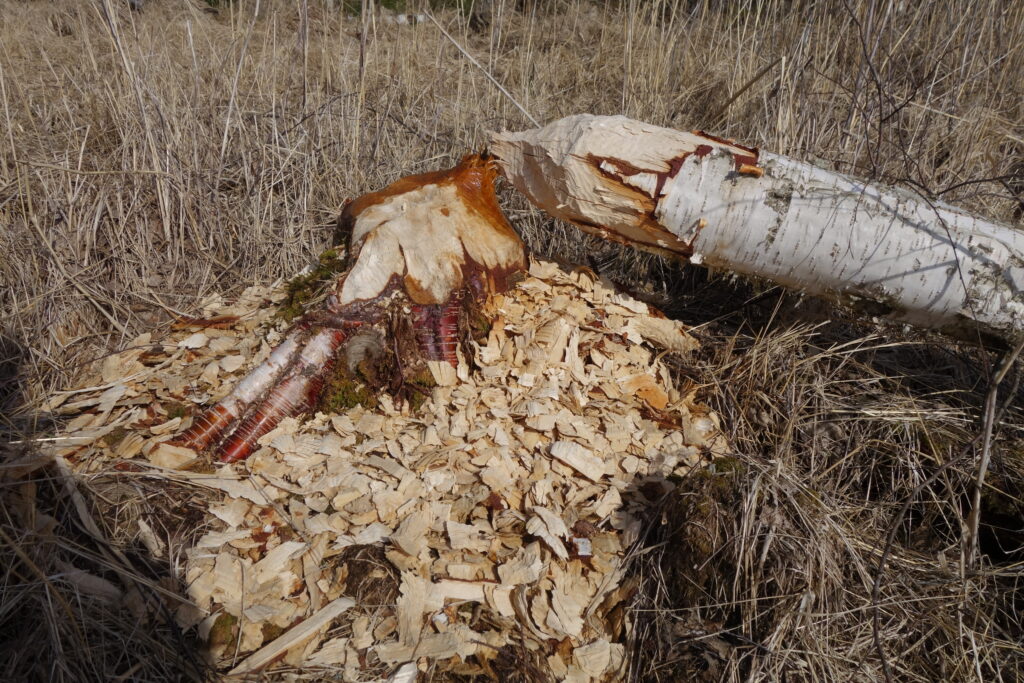 Eventually it was time for beaver safari with kayak. The season will keep on for many months until the winter is here again. We were happy to be here from start and are eager to follow the spring, summer and autumn together with the beavers. In the beaver lodge the last years generation are still with their parents and the new off springs are not yet born.

We started our silent paddling at dusk. The sky turned to blue, pink and purple, the birds were singing and fulfilled the atmosphere of being one with nature. In company of starlings, geese, herons, goosanders, red robins and blackbirds we thoroughly enjoyed ourselves. The cranes were trumpeting and telling us spring was here. Now and then the sighing fog-horn call from the great bittern was heard from the wide and dense reeds. Suddenly the first beaver appeared! To our joy we realized that the beavers had been busy building two new lodges since August last year. The moon rose, it got darker and darker. We had contact with seven more beavers from at least two different territories. It was time to paddle back by the sound of the snipe dazzling in the sky and the sounds from the wood cock on its route in the sky over our heads. We were looking forward to a good nights sleep and to dream of next day’s adventures.

Morning has broken! Our mission for the day was to investigate the territories of the beavers. As most beavers rest at day in their lodges we didn’t expect to meet any beavers. Splash! A curious beaver right in front of us. Probably it was a young one as it was so interested in us. We followed it respectfully for quite a long time. We went ashore on the beaver island to investigate their habitat. The first signs were young oak trees that were grazed during winter time when fresh food is scarce.

We entered a diversified forest with trees in all stages and ages – from young plants to older trees and dead standing and lying trees covered with moss and fungus. A virgin forest! The beavers’ favorite trees are aspen and birch. They also like willow, rowan, alder and oak.

Since we were here in August last year, a lot had happened. The beavers had really harvested a lot. We observed a concentration of logs in the neighborhood of the new beaver lodge. From the harvesting place paths and canals led out to the water. The branches and logs are used for the building and small logs, branches and twigs as a winter food storage stuck down in the water nearby the dwelling.

Out on the water again to investigate the next territory. Canals in the reeds show where beavers transport their material. The entrance to the lodge is under water to prevent predators to get into the lodge. We followed down stream and on our way we saw a lot of new interesting birds as marsh harrier, grey heron, osprey, buzzard, hawk, hobby, kestrel and white-tailed eagle. It was the first day we met the swallows. There is a saying when the first swallow arrives summer is here. We also observed a lot of geese, swans, whoopers, teals and other ducks, grebes and divers.

Our turning point at the lake showed a fantastic view. Beavers live in rivers, small and big lakes and they are even seen i salt water areas. On our way back we passed another lodge, rebuilt on an old lodge. The logdes are built by logs, branches, twigs, stones and mud. Inside the entrance you find a chamber for eating and also a chamber for sleeping. The “bedroom” is covered with grass and moss to make it cosy and comfortable for winter. In the end of April life changes dramatically for the beavers when nature awakens. After a long winter with a poor diet of inner bark from twigs and branches fresh plants, sprouts and leaves starts shooting. What a feast for beavers!

It is an honor to get to know these wonderful, hard working engineers. You are welcome to follow us in our next blog. More information about ecology in another habitat where beavers build their dams. Of course you are invited to meet beavers together with us. Safari in tandem kayak or by foot!