Stunning May week for sea kayaking

The Bohus archipelago showed its best when a high pressure moved in from east in the middle of May. With almost no wind and high air temperature the water temperature rose up to 16 degrees Celsius in the sea. During these circumstances its easy to reach the outer archipelago in contact with the huge sea.

The nature exploded with temperatures up to 28 degrees Celsius. We went ashore in a most spectacular nature reserve – Valön. The red granite rock by the sea was surrounded by blossoming meadows filled with all kinds of spring flowers. The cowslips are favored by shells and shell deposits as well as by cattle. Typical for this habitat is the pink thrift. The sounds of the birds in spring are overwhelming. From every bush, on the rocks and in the sky the birds did their best to show up in their colorful plumage.

After a long paddling and a walk on the peninsula it was really refreshing with a swim from the cliffs. The water was crystal clear and we admired the shells, Japanese oysters, mussels and different kinds of wracks in the water.

It was time to leave this wonderful place and slowly paddle back admiring the light on the rocks and the sea in the sunset. We were companied by cormorants, black guillemots, terns and gulls who filled their stomachs with herrings who also were chased by macherels. The eiders were occupied by wooing and the air was filled by the males’ calls. 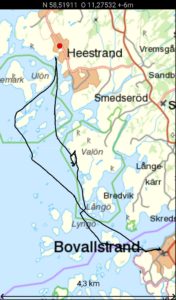 P.S. We didn’t mention that we went ashore in Bovallstrand and had an ice cream 🙂